Historically and culturally significant property at Mu’olea Point in Hana is a step closer to gaining a long-term caretaker under a proposed county agreement with Na Mamo O Mu’olea. 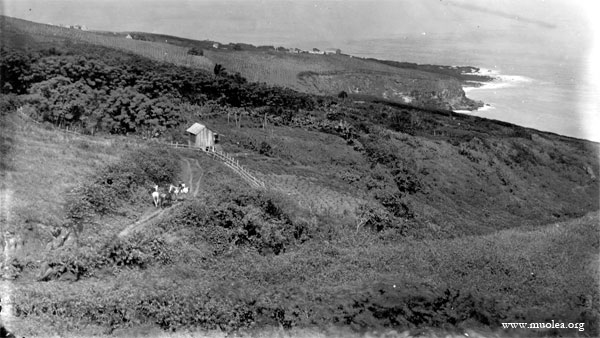 The Maui County Council at Tuesday’s meeting will consider a report from the Economic Development, Energy, Agriculture and Recreation Committee, chaired by council Vice Chair Don Guzman, endorsing a resolution granting Na Mamo a lease to manage the 73-acre site for 50 years. The property was purchased by the county for $3 million 10 years ago, with two-thirds of the funding from the federal government and additional assistance from The Trust for Public Land and the Office of Hawaiian Affairs.

The property’s notable features include heiau, archaeological sites and native plants. The lease would formalize the authority and responsibilities of Na Mamo, which has been maintaining the property.

Another report by Guzman’s committee details the development of the Upcountry Dog Park, now set to open in Makawao this December.

Committee Report 15-91 recommends passage of a bill to authorize land use entitlements for roadside stands and farmers markets that sell local agricultural products. This matter was carried over from the Aug. 7 council meeting to allow administration officials time to comment on Council Member Bob Carroll’s proposal to exempt Hana from the bill.

The Policy and Intergovernmental Affairs Committee, chaired by Presiding Officer Pro Tempore Mike Victorino, is recommending adoption of a resolution approving installation of six solar-power emergency warning sirens. The sirens, which will have a mile-and-a-half sound range, are planned for Kenolio Park in Kihei, Richard “Pablo” Caldito Park in Waihee, Kanaha Beach Park in Kahului, Paia Youth and Cultural Center and two sites on Molokai, Papohaku Beach Park and One Alii Park.

Victorino’s committee also recommends passage of a bill approving a cost-sharing agreement with the State of Hawaii for wastewater services at the Lahaina Civic and Recreation Center. The site campus features mostly county operations, including the Lahaina Police Station and Lahaina Civic Center Gymnasium, but also houses the state-managed Lahaina Comprehensive Health Center.

Council Member Riki Hokama’s Budget and Finance Committee has recommended approval of the first budget amendment for fiscal year 2016, which began last month. The amendment authorizes use of a previously appropriated sum of $14.9 million for the county’s health benefit obligations to the Employer-Union Trust Fund.

The council is closely watching the use of this money to ensure it is properly invested for the benefit of county taxpayers. The county auditor had reported on the administration’s apparent failure to maximize EUTF investments in the past.

Also on Tuesday’s council agenda is a resolution to forgive construction-related debt for Ka Hale A Ke Ola Homeless Resource Centers Inc., which provides emergency and transitional housing in Lahaina and Wailuku and seeks to break the cycle of homelessness on Maui. As stated in the report issued by the Housing, Human Services and Transportation Committee, chaired by Council Member Stacy Crivello, the council’s intent is for savings realized from the debt forgiveness to be used in furtherance of the organization’s charitable mission.