Viewpoint
By ELLE COCHRAN, for The Maui News

I shared a great big sigh of relief with all of West Maui and especially with the residents of Pu’ukoli’i Road when I received word from the administration that Pu’ukoli’i’s resurfacing would finally commence, after all of these years. 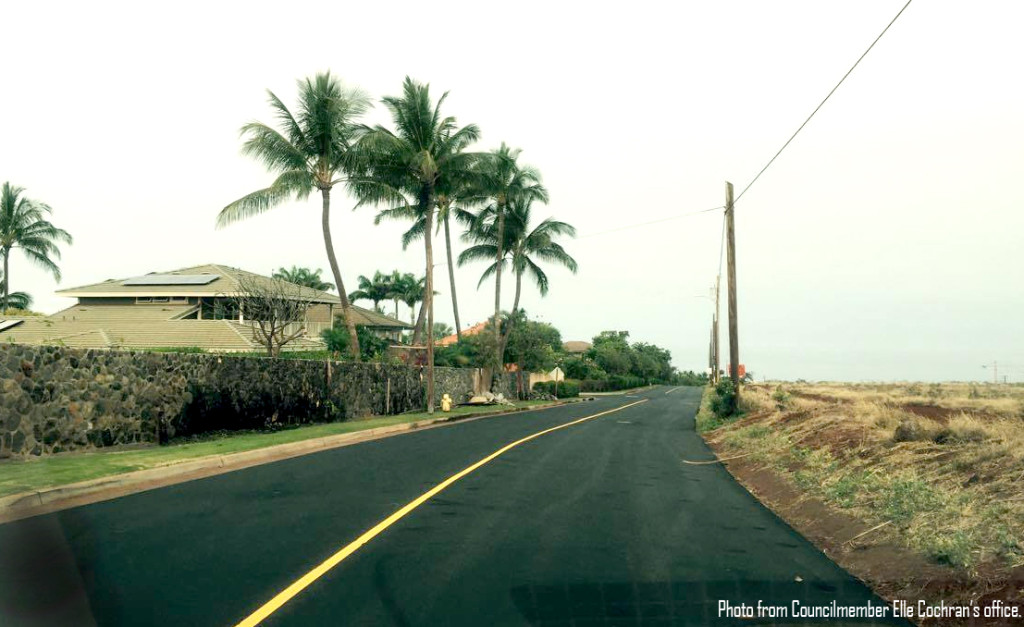 I commend the Department of Public Works for all of its hard work to see this through to fruition.

Halfway through my first year in office (in 2011), I received an inquiry from a concerned resident in the area. Initially, I was able to see the bad condition of the road (remotely) using Google Earth but drove the road myself on my way home that afternoon. After seeing it for myself, I hired a good videographer friend of mine, with personal funds, to drive with me up and down the road while he recorded it for Akaku.

After speaking to the concerned individual, I told him that I would do my very best to allocate funding for the repaving in the next budget cycle.

Little did I know at the time, the many complications that would need to be resolved before county funds could be assigned for this particular resurfacing project.

I spoke with the Department of Public Works on a number of occasions, and they informed me that we (the county) did not own certain sections of the road. They had intentions to conduct surveys on the privately owned remnant parcels to determine the exact boundaries of ownership.

I was told that once the parcels were identified, the county would need to work with the land owners to take over ownership of the remaining portions of the road to make improvements. It was made clear to my office, under no uncertain terms that this process was going to take some time.

After the budget session concluded, I sent in an explanation of the issues surrounding Pu’ukoli’i to the Lahaina News to clarify the situation to the public for their own awareness.

Understandably so, the residents in the area were very frustrated.

My office staff and I coordinated a meeting for the residents of Pu’ukoli’i, in the mayor’s office with myself, the Department of Public Works director and deputy director, an executive assistant to the mayor, as well as, the Director of the Department of Transportation (and former West Maui council member), Jo Anne Johnson Winer.

The meeting took place in August of 2012 and was intended to be a chance for the public to air its frustrations and receive face-to-face answers about what the issues were, as well as, what was being done.

Overall, the meeting left the residents with a better understanding, and although the situation was still frustrating, they at least understood why the problem would take a while to resolve.

The last time that I requested an update from the department was in April 2014. At that time, the department had made some leeway and determined that they would need to acquire five separate road lots and were waiting on the owners of the lots to resolve some issues with their deeds.

I realize this was an issue long before I took office, it remained an issue for almost six years while I was in office – and now (thankfully) is finally resolved. I can assure you that I take every constituent concern seriously and to heart. I support my community to the best of my ability and within the confines of my position and authority.

I look forward to test driving Pu’ukoli’i Road, and I hope that the community will feel as I feel that with cooperation, patience and understanding, as a community and as public servants we can set out to accomplish anything we put our minds to, even if it’s a long, bumpy, uphill road to get there.