MAKENA, Maui – More than 250 attendees gathered for the Hawaii State Association of Counties annual conference at the Makena Beach and Golf Resort June 24-26.

The Maui County Council hosted this year’s conference with the theme: “Why invest in our counties? Counties move Hawaii forward.”

Professionals in the fields of stimulating responsible growth, affordable housing and financing infrastructure projects shared their expertise and showcased successful projects and legislation throughout the state.

The conference focused on successful collaboration between state and counties, examined means of meeting the challenge of 100 percent renewable energy and reviewed current and future infrastructure challenges the counties.

In her presentation “Strong Economies, Resilient Counties,” keynote speaker Emilia Istrate, research director for the National Association of Counties, noted the U.S. economy is definitely improving, but the road to recovery is still sluggish. 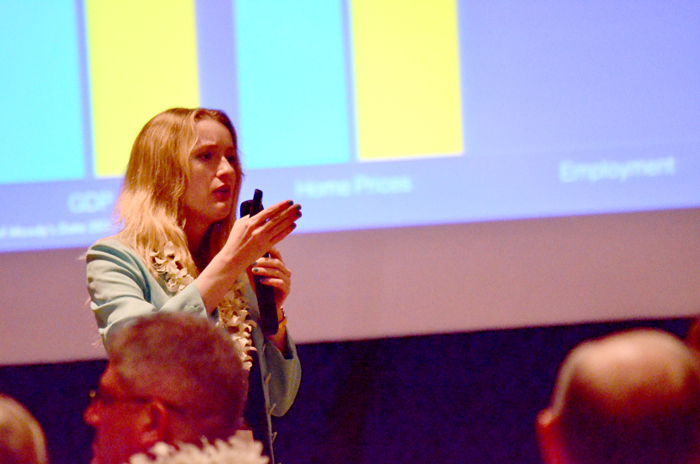 Istrate said county governments are successfully promoting economic development by investing in the construction of public facilities and other forms of infrastructure. She noted collaboration – among all levels of government and with the private sector – is the key to addressing infrastructure, workforce and other economic challenges. 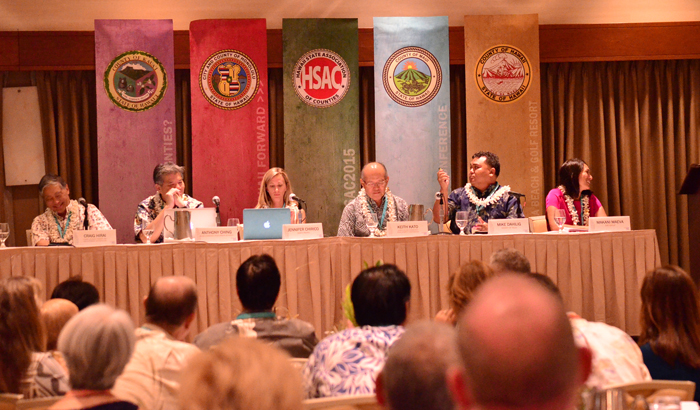 Craig Hirai, executive director of the Hawaii Housing Finance and Development Corporation, said his agency facilitated 940 affordable housing units during fiscal year 2014 while managing assets in excess of $1 billion. Hirai said HHFDC has facilitated the development and preservation of 6,428 housing units in the last decade.

Jennifer Chirico, president of Susty Pacific, described how green and sustainable building practices that respect the host culture are being used for an agricultural project on Maui with affordable-housing components.

Lt. Gov. Shan Tsutsui spoke on behalf of the Ige Administration and expressed support for considering the transfer of more authority to local governments.

Nadine Nakamura, managing director of Kauai County, said the mayor and council working in unison is helpful when seeking funding for capital projects from the state legislature.

But she said operational costs continue to be challenging.

“Our latest bike path on Kauai was the product of matching funds and donations, but now we need financing to maintain it,” Nakamura said. “Building infrastructure is easier compared to its maintenance, which will cost a lot more.

“Overall, Kauai is $104 million behind in infrastructure repairs.”

The importance of home rule was emphasized.

“Counties must be allowed to bundle similar projects for cost savings and need more land use authority,” said Maui County Councilmember Riki Hokama. “Counties are innovative leaders – we’ll do whatever we can to survive.”

Hokama is presiding at the NACo annual conference in North Carolina starting this week.

“What the counties have at its disposal are fees – service fees, penalties and fines,” Souki said.

Panelists for this breakout session, moderated by Kelly King, vice president of Pacific Biodiesel, shared impressive data and anecdotes on their organization’s experiences with biodiesel fuel for their vehicle fleets.

Ed Sniffen, deputy director of the state Department of Transportation, made a commitment at the start of the Ige Administration to have the fleet of DOT vehicles use B20 biodiesel fuel, a typical blend for normal use in conventional diesel engines.

Sniffen said leadership played a big role in facilitating the state’s conversion to biodiesel, citing Gov. David Ige and the legislature earlier this year established a 100-percent renewable energy goal by 2045. Sniffen said the entire DOT fleet will be fully converted by the end of the year.

Clyde Omija, assistant chief for the City and County of Honolulu’s automotive equipment services, said the city started using a B20 blend for fuel in 2004. He said it took about six months to fully convert all the vehicles in the city’s fleet.

Kelvin Kohatsu, fleet administrator for Hawaii Electric Light in Hawaii County, said converting to biodiesel was an easy decision for his company. HELCO’s fleet in 2008 performed at an average of 8.66 miles per gallon, which tripled to 24.62 miles per gallon this year after the conversion to biodiesel. 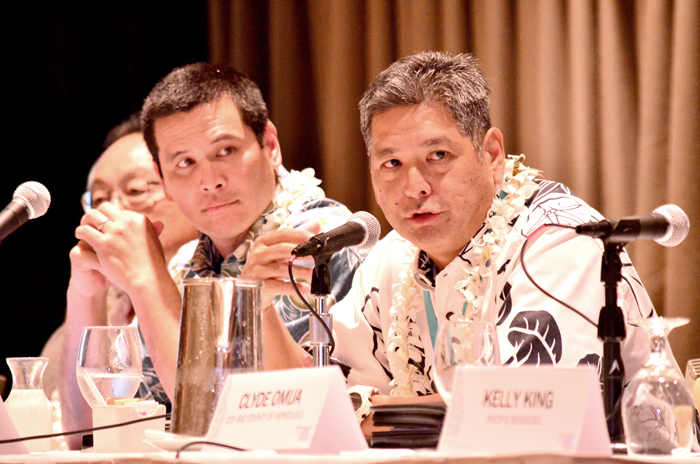 Randy Kurohara, deputy managing director of the County of Hawaii, started the conversion of the county’s fleet to biodiesel use in September last year. He said the Hawaii County Council passed measures supporting the conversion.

Nacapuy said the first thing he did upon entering office was to change his title from Chief Information Officer to Chief Innovation Officer. He said he seeks partnerships with the counties on tech initiatives.

Burt Lum, executive director of Hawaii Open Data, moderated the panel. He advised to look for “champions” in government who understand and support tech-related ideas and initiatives.

Mark Wong, technology director for the City and County of Honolulu, impressed conferees with his leadership in transitioning to paperless operations, which saved space and money for the city. 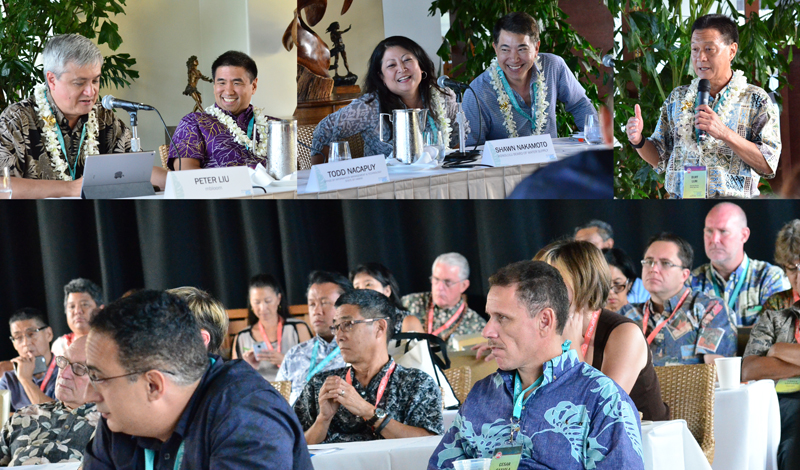 Shawn Nakamoto, information officer of the Honolulu Board of Water Supply, shared some insights about managing social media accounts for government entities. She cautioned that while social media has many benefits in disseminating information to the public, it should still be part of a larger communication plan, which does not replace traditional public relations practices.

The final panel of the conference affirmed the critical need for infrastructural improvements throughout Hawaii’s four counties. The panel was moderated by private attorney Jesse Souki, formerly the state planning director. 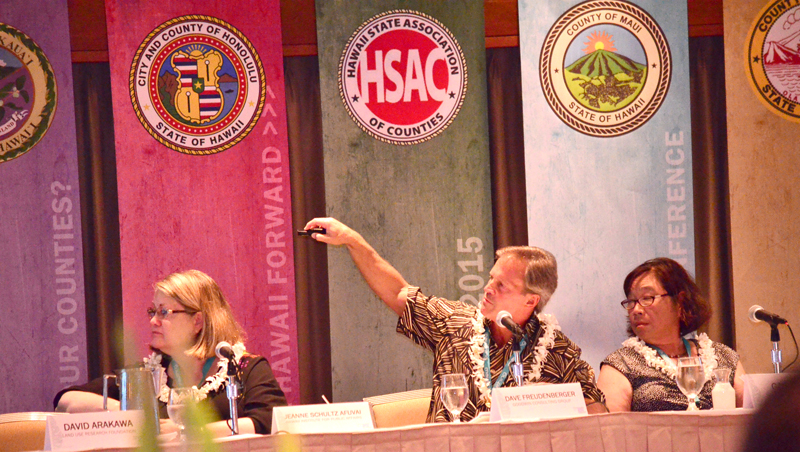 Jeanne Schultz-Afuvai, CEO of the Hawaii Institute for Public Affairs, said the construction industry accounts for more than 28,000 jobs in Hawaii, with employment projected to grow 25 percent in the next 10 years. She said a coordinated effort among government agencies will serve as a platform for future funding and resource allocation.

Afuvai also shared her organization’s list of “high-value projects” yielding the greatest economic impact planned up to 2034. She identified three priorities of concern:

Copies of conference presentations are available at MauiCounty.us/HSAC2015.

Both tours started with lunch at Three’s Bar and Grill in Kihei.

Some conferees enjoyed test drives of electric vehicles, provided courtesy of Tesla Motors and Jim Falk Nissan, with the latter supported by JUMPSmartMaui, Hitachi and Maui Economic Development Board.