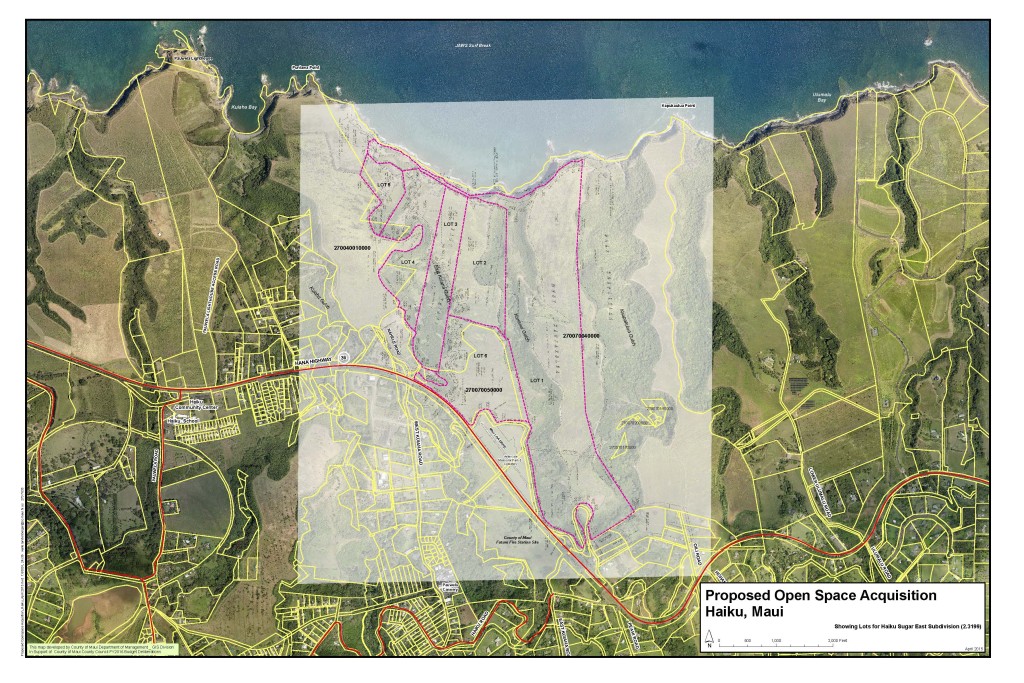 “This appropriation by the council sends a strong message of support for this acquisition to the administration, the land owner and the public,” Guzman said. “Time is of the essence, as the four parcels that comprise the 267 acres along approximately 1 mile of coastal frontage are on the open market.

“The Director of Finance is vested with the authority to enter into negotiations with the land owner for the purchase of real property for purposes in the public interest. With less than 30 days remaining before the commencement of the fiscal year ‘16 budget, it is my hope the director will begin discussions with the land owner sooner rather than later.”

The funding was approved under the county’s Open Space, Natural Resources, Cultural Resources and Scenic Views Preservation Fund, and this specific recommendation for funding was made by Guzman during the council’s annual budget session this spring. According to Guzman, the Open Space Fund has yet to invest in the Hamakuloa area of Maui’s North Shore, where the subject property is located.

For over 100 years, this oceanfront site of former pineapple farming activity has not been considered for development, Guzman said. The lands are located in the Haiku-Kuiaha region east of Paia and are owned by A&B Properties.

The property is near the iconic big-wave surf spot known as Jaws – “a landmark with enormous cultural history and significance,” Guzman said.

“This land meets all the purposes of the Open Space Fund, including public outdoor recreation and education, preservation of historic and culturally important lands, and protection of significant habitat, coastal areas and agricultural lands,” Guzman said.

Over a short period of one week, councilmembers and the mayor received an overwhelming show of support for the acquisition from the public via an online petition with over a thousand signatures, oral testimonies, emails and a paper petition urging the preservation of the large agriculture land tracts and the shoreline access.

“I am hopeful the administration understands the sense of urgency of this acquisition,” Guzman said. “This is a momentous opportunity – similar to prior acquisitions such as Lipoa Point, Launiupoko, Palauea, Ukumehame, Muolea, Nuu, Waihee Dairy and Kaehu – to do the right thing and ensure these special places are protected and available for use, care and enjoyment by our future generations.”