The mayor sent a letter to the county clerk on June 16 detailing his objections to eight elements of the budget. He included line-item vetoes of the new Kahului community center and the council’s water infrastructure improvement project, and objected to stipulations placed on parts of the environmental management budget. 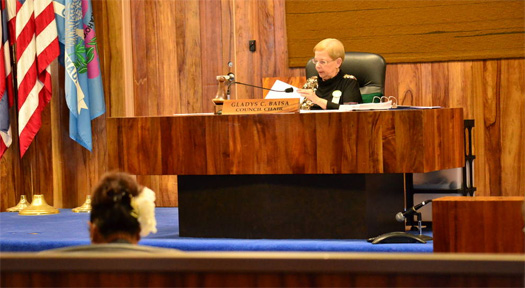 The Kula Agricultural Park expansion, the Molokai and Upcountry Maui water projects and the South Maui community park and multipurpose center were also given line-item vetoes.

“It is the council’s number one responsibility to pass a budget,” Baisa said. She and other council members emphasized the extensive public testimony and deliberations of the council in preparing the budget.

Councilmember Mike White, who chairs the Budget and Finance Committee, made a motion for override of the vetoes, noting he has full confidence in county managers to implement the budget.

“Although this veto represents democracy in action, it is important for residents to understand what is at risk,” White said. “The vetoes will remove essential components of the budget specifically requested by the residents.”

In his statement, White said the vetoes would put the county at risk of losing about $5 million in state funds appropriated for the Kula Ag Park, which is intended to create additional farmland. He added the mayor’s veto would have removed the $12.6 million for water infrastructure improvements placed in the budget by the council as a direct response to the community’s demand for water meters.

“As chair of the Infrastructure and Environmental Management Committee, (I know) there were opportunities for the administration to address their concerns,” said Councilmember Elle Cochran, who addressed the vetoed items relating to the county’s solid waste management. She encouraged collaboration to best serve the public.

“I wish it didn’t have to come to that,” Councilmember Stacy Helm Crivello said about the need for a veto override. Crivello urged the administration to proceed with recycling programs, notwithstanding concerns expressed by the mayor.

Councilmember Don S. Guzman identified “inconsistencies” in the mayor’s veto letter, which stated there was no location identified for the proposed Kahului community center. Guzman said a location had been identified, and cited Ordinance 3559 (2008), which included a zoning condition for A&B Properties stating the company shall provide approximately seven acres for a multipurpose center in Kahului.

“The purpose is to expedite the project and move forward with design,” Guzman said. “Monies appropriated last year have not been spent, and we cannot afford further delays.”

Councilmember G. Riki Hokama addressed the mayor’s concerns about general obligation bonds not being approved for some projects listed in the budget. “No one should be fronting general funds for a project that’s not been authorized,” he said. “That’s why entities return to council, to get authorization to spend monies as soon as they know what to do with the funds.”

Council Vice-Chair Robert Carroll said the budget the council passed is the “best budget for our people.”

Councilmember Donald G. Couch, Jr. said he wanted to discuss each of the line-item vetoes but his motions to consider three of the items separately didn’t earn traction for discussion. “I respect the decision of my colleagues and look forward to the implementation of the budget,” Couch said.

Councilmember Michael P. Victorino said the council has “put a lot of sweat equity” into the budget process. “We’ve covered all our bases, and we were able to compromise on a lot of things,” he said.

Baisa called for the vote, and the council unanimously passed the override. “I respectfully ask all to pick up our marbles and move forward to help each other,” she said. “I appreciated this process, and now we must work together to have the best possible results for the community.”

The council passed on second and final reading a $603.6 million budget at its June 6 meeting after more than two dozen committee meetings held in the Council Chamber and districts throughout Maui County from March 31 through May 5.