During the economic downturn, the state took the counties’ share of the transient accommodations tax, also known as hotel tax or TAT, to balance the state budget. 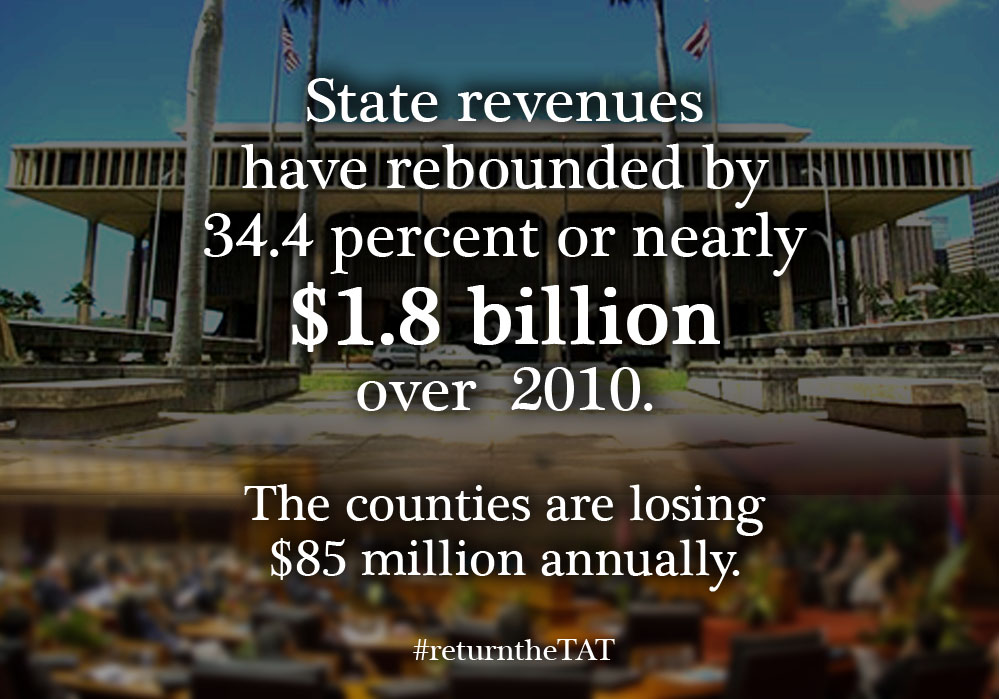 Similarly, since 2007, the TAT distribution to the state increased by $198 million while counties have collectively received an additional $2.2 million. Because of this unfair distribution, counties have annually lost $85 million.

I attended the Hawaii State Association of Counties meeting on Monday at Honolulu Hale, where council members from across the state discussed the importance of counties getting back a fair share of TAT revenues. It’s imperative because county expenses are continually rising.

From 2007 to 2014, Maui County’s costs for improvements to beaches and other parks increased by more than 26 percent. Combined costs for fire and police protection have increased by 35 percent.

Visitors depend on counties maintaining ocean safety, beaches and parks, public safety, public transportation and the overall maintenance of our county’s natural beauty. Counties also provide numerous social services that keep our communities vibrant and hospitable to visitors. An equitable distribution of TAT revenues would help counties to address these associated costs.

With the TAT shortfall, counties have been forced to raise property tax rates. Maui County removed and reduced numerous property tax exemptions out of necessity.

The Legislature earlier this year passed a law allowing the counties to impose a general excise tax surcharge. But this isn’t a generous or effective gesture.

Expenditures from the GET surcharge would be limited to transportation capital and operating costs and ADA compliance. Moreover, the GET is a regressive tax, applying to local residents’ purchases of basic necessities such as food and medical services.

The GET surcharge isn’t a solution. Instead, the counties deserve to have the visitor-generated TAT returned to them in a fair manner.

According to visitor-industry consultant HVS, Hawaii’s county governments are ranked 149th out of 150th in a study of lodging taxes generated by local municipalities throughout the United States.

The state’s TAT Working Group appears poised to recommend that the Legislature provide a slightly better deal for the counties. But the counties shouldn’t settle for anything less than a 50-50 share, with the state paying for the Tourism Special Fund, Convention Center and other state-related costs from their share.

Even with an equal split, Hawaii’s local governments would still rank 148th in taxes on lodging. But it would be an improvement that would make a meaningful difference in our ability to balance our budget while maintaining core services and holding the line on property taxes.

It’s not enough for county officials to be united at the state Legislature in the 2016 session. We are counting on county residents to contact their state legislators to support the return of more TAT revenues.