As spring approaches, it also marks the start of the County of Maui’s budgeting season. Pursuant to the charter, the mayor is required to submit a budget proposal to the County Council by March 25. Since this year the date falls on a Saturday, the fiscal year 2018 proposal will likely be presented on March 24.

The budget proposed by the mayor is the county’s financial plan for the upcoming year. It outlines how much money and personnel each department is requesting and also includes proposals for capital improvement projects such as roads, parks and other infrastructure.

The Budget and Finance Committee will begin the review of the mayor’s proposed budget at the end of the month and is one of the council’s most important responsibilities.

Committee members meticulously review each program request to determine what can be funded with available resources. This includes assessing whether a request should stay the same, be reduced, expanded, or if resources should be transferred and be used in a better way.

It’s a tough process with tight deadlines and usually requires deliberations that last late into the night. The budget session is the only opportunity for council members to provide direct input on the budget. Once signed into law by the mayor, any further changes may only be initiated by the administration.

Several council committees have already received overview presentations of departmental operations, including items on their wish list for the next fiscal year.

The committee, chaired by Council Member Riki Hokama, will also engage the community in a countywide outreach effort to receive comments on funding priorities. 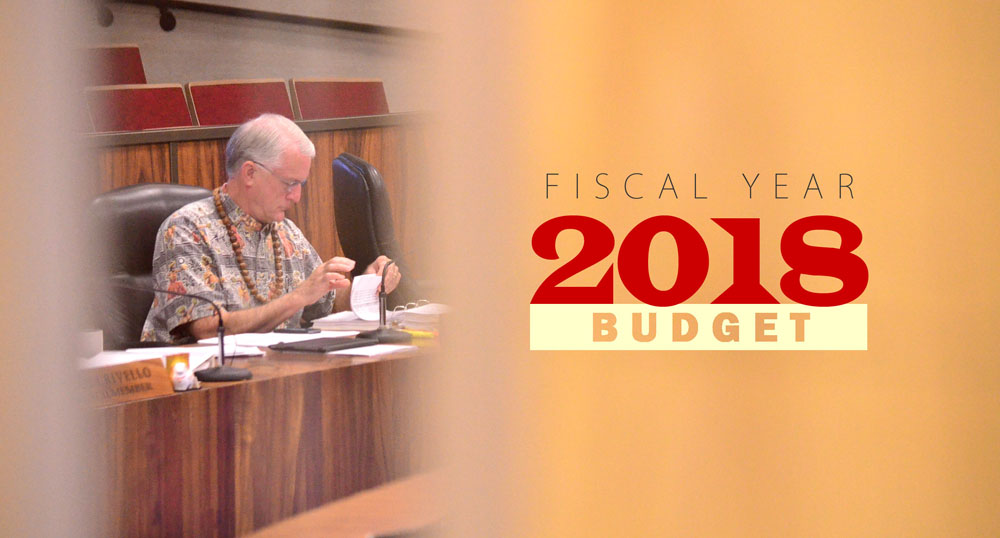 You have the opportunity to provide oral or written testimony at the following meetings:

Input is critical in helping to determine what programs need to be expanded and what adjustments need to be made for taxes and fees. There are many decisions that need to be made and public direction is key as, after all, it is your taxpayer dollars.

I also continue to monitor state legislation that will have impact on the counties’ budgets. The proposal to phase out the counties’ share of the transient accommodations tax, or hotel tax, has been deferred after substantial opposition, including from many residents in Maui County. Thank you to those who submitted testimony in opposition.

Other state proposals that could have a significant impact on the budget include a duo-bill (Senate Bills 683 and 686), which would initiate a constitutional amendment to create a surcharge on the real property tax revenue to fund our education system. House Bill 1410 would initiate a pilot program to pass on the management of Emergency Medical Services from the state to the counties.

While the intent of these measures may be admirable, these infringe on county jurisdiction, which would set a poor precedent that may have long-term damaging consequences on our ability to raise revenue.