Correction: The first reading of the Budget and Finance Committee’s proposed Fiscal Year 2016 budget is on May 26.

The Maui County Council will conduct a public hearing on the proposed fiscal year 2016 budget on Thursday at 6 p.m. in the Council Chambers in Wailuku.

The agenda provides an overview of the operating budget for each county department and proposed capital improvements.

At just under $700 million, the mayor’s budget proposes a $96.3 million annual spending increase. Council Member Riki Hokama has been leading committee discussions over the last several weeks on whether the corresponding increases in water and sewer fees, vehicle weight and fuel taxes, residential trash collection and commercial landfill fees are warranted at this time.

More than $166 million in capital funding is proposed for the Department of Public Works, including road, bikeway, bridge and sidewalk improvements. Some of the streets slated for upgrades are Kokomo Road, Piikea Avenue, Onehee Avenue, Kea Street, Waiko Road and Lower Honoapiilani Road. 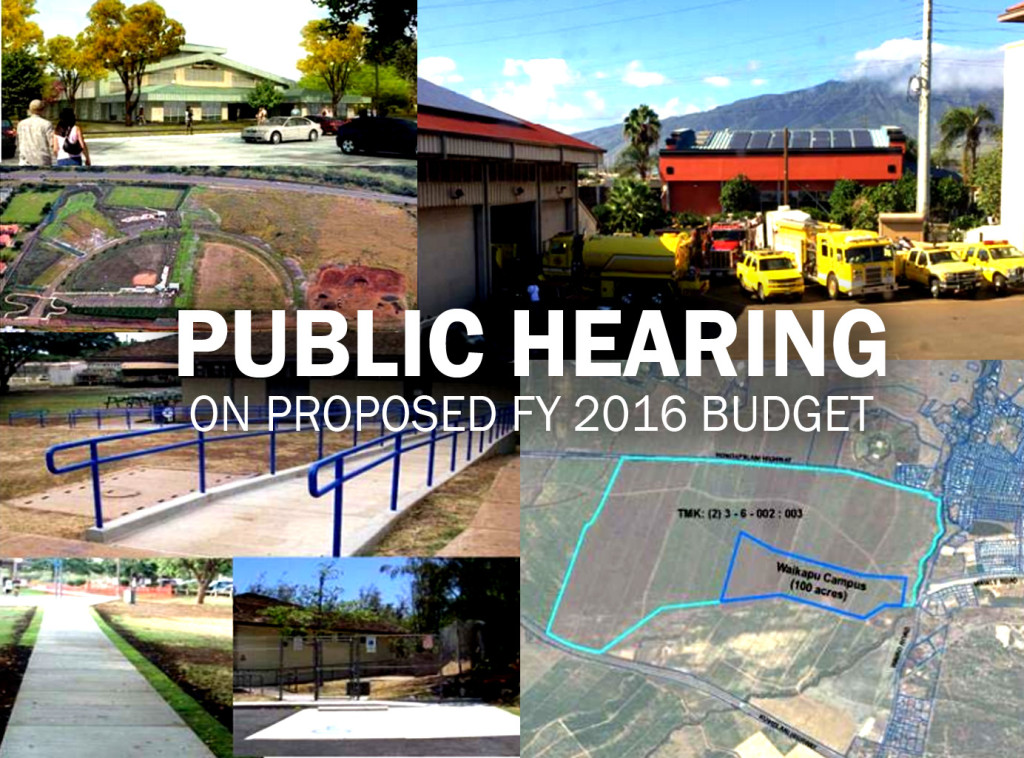 Construction of a new office building at the Old Wailuku Post Office site, upgrades for the War Memorial Civic Complex and the Wailuku Redevelopment Parking Expansion are also on the docket. Other proposed improvements in government facilities include expansion of the Division of Motor Vehicles and Licensing satellite office in Kihei, as well as renovations for the Lanai, Kihei, Haiku, Kahului and Paia fire stations and the Lahaina police station.

Upgrades for the Lanai Youth Center and Kula Park Playground are among the proposed recreational improvements. The Department of Environmental Management seeks funding for the West Maui Recycled Water System Expansion, with the stated purpose of increasing the use of nonpotable water for irrigation.

Are these the most-needed projects for Maui County residents at this time? And can taxpayers afford to fund them?

I invite you to review the proposed budget and agenda at mauicounty.us/2016budget. Please tell the council how to prioritize funding for the county’s projects and services.

Prior to Thursday night’s public hearing, you can testify at the Budget and Finance Committee’s district meetings – Monday at Lihikai Elementary School in Kahului and on Wednesday at the Mayor Hannibal Tavares Community Center in Pukalani, both at 6 p.m.

The committee’s decision-making week starts April 27. The council will then act on the committee’s recommendations, with the budget’s first reading planned for May 27 and second and final reading on June 6.

* Mike White is chairman of the Maui County Council and vice chair of the council’s Budget and Finance Committee. He holds the council seat for the Paia-Haiku-Makawao residency area. “Chair’s 3 Minutes” is a weekly column to explain the latest news on county legislative matters. Go to MauiCounty.us for more information.