On Tuesday at 9 a.m. in the Council Chambers, the county’s $705.2 million fiscal year 2018 budget will be considered for second and final reading by the County Council. Its passage will mark the end of an extensive review of each department, along with the overall financial picture of the county. If approved and signed into law, the budget will take effect on July 1. 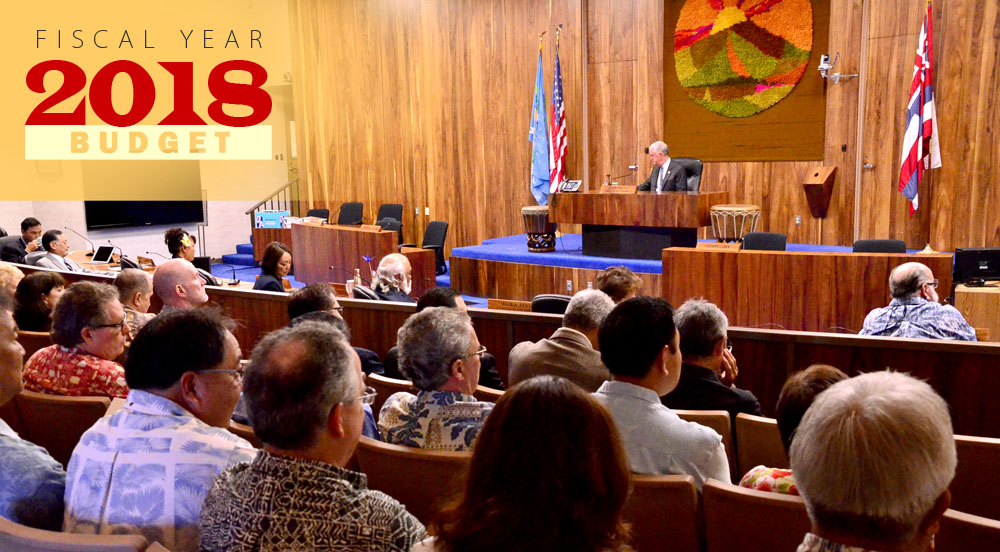 Many discussions and decisions were made throughout budget deliberations, but due to time constraints, not all issues could be resolved. As a result, outstanding items were referred to appropriate subject-matter committees for further discussion.

A high-profile matter is the operations of the Waiehu Municipal Golf Course. Although the council rejected the mayor’s proposal to close the course, issues still remain and must be resolved to make future operations viable. The Parks, Recreation, Energy and Legal Affairs Committee has been tasked with overseeing the changes and monitoring improvements to course operations — such as the ability to book tee times online and accept credit card payments.

The committee was also referred the matter of commercial ocean recreational activity fees. The mayor proposed an increase for each permitted activity from $1,000 annually to $200 per month for operating ocean activities such as kayak or surf lessons at county beach parks.

After passionate testimony from operators who cited an undue burden with a large fee increase, it was rejected pending further discussion on how the fee can be better structured and how enforcement can be improved.

A proposed Waihee route for the Maui Bus and expanded hours for routes in South and West Maui, in addition to potential fare increases, were referred to the Housing, Human Services and Transportation Committee. In-depth studies on the viability and cost recovery are important before additional funds are appropriated for bus expansion.

Throughout the budget, it was also shared that due to low ridership on the Kula route, the county subsidizes nearly $35 per boarding. Better management or reconfiguration of routes and possibly a shifting of resources must also be a topic of further discussion.

The “3 Can Plan” pilot program, which allows residents of Maui Meadows in South Maui curbside recycling, green waste and trash collection, was again a topic of discussion. The program was intended to be short term, but has continued at the request of residents with an additional fee. Its cost to the county, long-term feasibility and usage must be further analyzed before a final decision is made to permanently continue, expand or discontinue the program. The matter was referred to the Infrastructure and Environmental Management Committee.

A full list of budget session referrals is listed on the council’s May 19 agenda.

At the same meeting, the council was also notified that an arbitration agreement with Units 2, 3, 4 and 13 of the Hawaii Government and Employees Association for supervisory blue-collar, nonsupervisory white-collar, supervisory white-collar and professional and scientific employees for the County of Maui has been decided upon. Council approval is required, which is estimated to cost over $2.3 million for fiscal year 2018 and over $5.6 million in fiscal year 2019. The Budget and Finance Committee will further discuss the matter at a future meeting.

Finally, the mayor officially informed the council of a vacancy on the Police Commission created by the passing of May Fujiwara. I was saddened to hear this news, as she served as the president of the Lahaina-Honolua Senior Citizens Club and frequented the council chambers to testify on important community issues. She also served on many other boards and commissions throughout the years and was truly a gem for Maui County. She will be missed and I appreciate her service.

Monday we celebrate Memorial Day and I am forever grateful to all the men and women who made the ultimate sacrifice to defend our freedom.