Published in The Maui Neews, December 20, 2015
By STACY CRIVELLO, for The Maui News

Voters approved the creation of a county Department of Transportation in 2002 to “facilitate the rapid, safe, and economical movement of people and goods in Maui County.”

Approval of this charter amendment demonstrated the public’s commitment to the transit system now known as the Maui Bus. More than 13 years later, how is the Maui Bus doing?

That was the heart of the matter when the Maui County Council’s Housing, Human Services and Transportation Committee reviewed the Short-Range Transit Plan on Dec. 8. The plan describes the county’s existing transit system and future service goals through 2020. 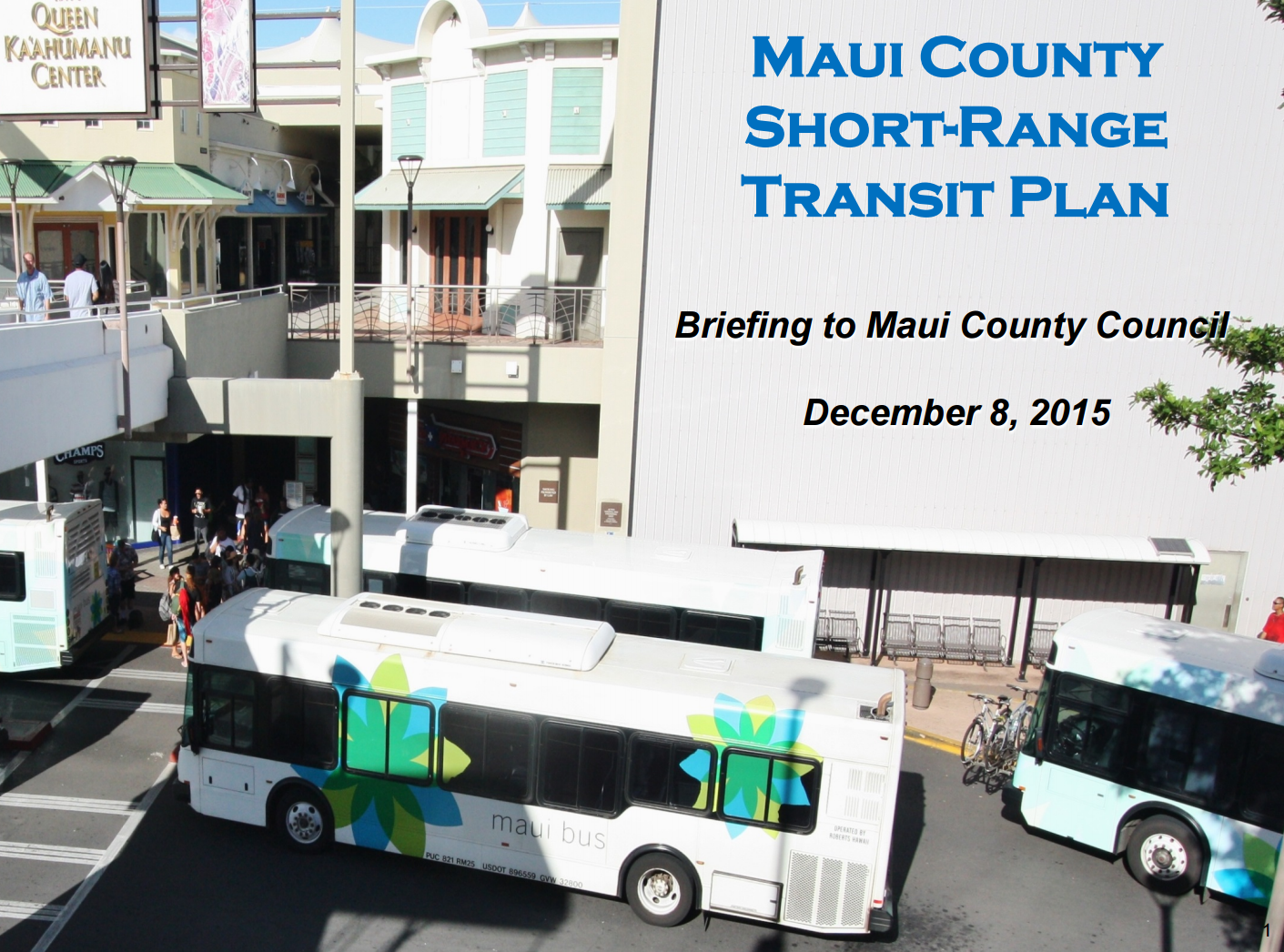 Though gas prices have been steadily decreasing, it’s still expensive to own and operate motor vehicles. A reliable transit system can help commuters save time and money, while also taking cars off congested roadways at peak traffic times.

Ten years ago, the Maui Bus had only 154,616 passengers served, as compared to 2,405,163 in fiscal year 2015. Seventy-five percent of current riders are Maui residents who use the bus to get to work, showing that more Maui residents are commuting by transit, according to a survey conducted for the plan.

About 85 percent of respondents provided positive marks for the Maui Bus on most factors, including safety, driver courtesy, appearance and overall service quality. Survey respondents suggested more frequent and later evening service, and the addition of more bus stops and new routes.

In its presentation to the committee, the Department of Transportation said it anticipates needing $78.7 million over the next six years to develop new routes, maintain facilities and replace buses. The county must acquire land for bus stops and passenger shelters that are accessible to persons with disabilities.

The plan also calls for $69.3 million over the next six years in capital investment, to accommodate transit facilities, passenger systems and fleet replacements.

The plan incorporates possible revenue sources and makes recommendations regarding fare adjustments and the creation of an annual pass for fixed routes.

The committee will later consider the creation of the Maui Metropolitan Plan Organization, which may support the county’s transit needs. According to the department, this entity will better coordinate transportation planning at all levels of government and make more funding available to the county.

Diversifying transportation options is a core theme in several components of the Maui County General Plan. For instance, the Countywide Policy Plan directs policymakers to “expand ridership of transit systems” and “reduce reliance on the automobile.”

The Short-Range Transit Plan appears consistent with these objectives, at least for the island of Maui. Committee members observed, however, the plan doesn’t take into account the needs of Lanai and Molokai residents.

It’s important to note the Department of Transportation has a countywide mandate to plan for “all modes of transportation in Maui County, including those in the air and those on water and land.” As someone who commutes by air, I’m keenly aware of the need for affordable and reliable transportation options for all county residents.

I thank the department and the private consultants who created the Short-Range Transit Plan, which gives council members a lot of information to consider as we look ahead to next spring’s budget session. A copy of the plan has been posted on the committee’s website at mauicounty.us/ HHT.

I welcome comments. The committee’s email address is hht.committee@maui county.us.

On a personal note, I wish a happy retirement to Director of Transportation Jo Anne Johnson Winer, who will be leaving public service at the end of the month after five years as a Cabinet member and 10 years as a council member.

* Stacy Crivello is chairwoman of the County Council’s Housing, Human Services and Transportation Committee. She holds the council seat for the Molokai residency area. “Chair’s 3 Minutes” is a weekly column to explain the latest news on county legislative matters. Go to mauicounty.us for more information.