The issue of homelessness has been a hot topic of conversation lately and the County Council has been urged to appropriate more money to address the situation.

The governor’s emergency proclamation on homelessness, which was signed in October 2015, has been extended multiple times. The Arakawa administration submitted proposals to the council that may offer solutions, but proposals are still subject to public debate, review and long-term planning.

There is no question that homelessness is an important issue, as Maui County statistics have shown how much it’s prioritized through the years.

The 2015 Homeless Service Utilization Report provided by the Center on the Family at the University of Hawaii at Manoa notes the number of homeless being serviced statewide from fiscal year 2007 to 2015 grew from 11,070 to 14,954 – a 35 percent increase.

Though the report indicates that homelessness is on the rise, more detailed data show Maui County is not following the statewide trend.

Since 2007, those who have experienced homelessness here in Maui County has grown from 2,136 to 2,206 or 3.2 percent. This number is the smallest compared to Kauai County’s 27.5 percent, City and County of Honolulu’s 40.6 percent and Hawaii County’s 63.3 percent in growth. 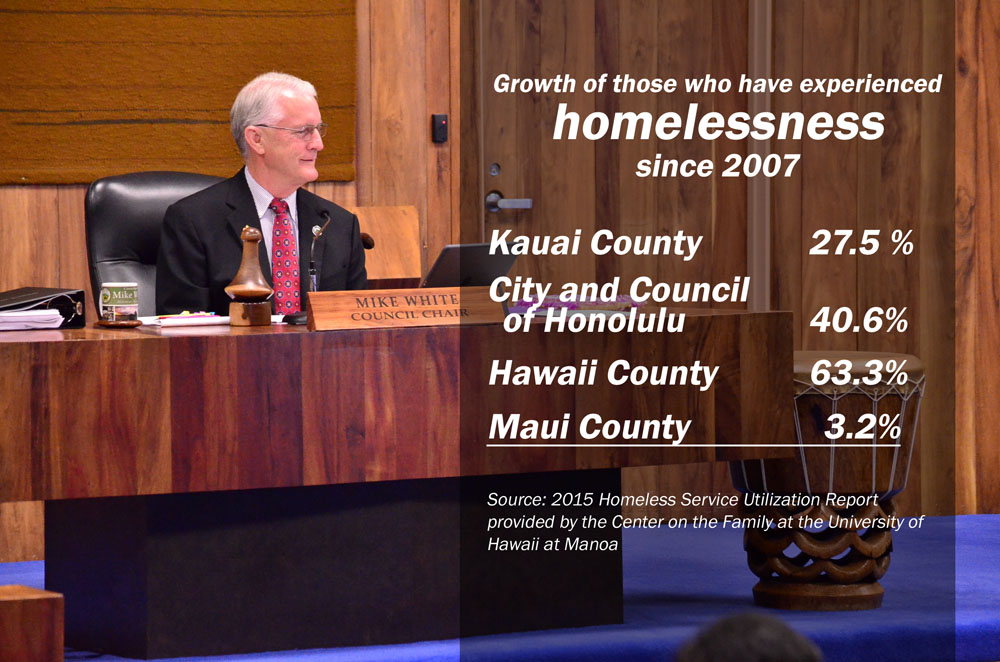 Between fiscal year 2014 and 2015, all counties except Maui County saw increases in the number of homeless individuals served. Maui County actually saw a decrease in its number from 2,332 to 2,206, a 5.4 percent decrease in one year’s time.

These results are not surprising.

Contrary to hearsay about the council’s inaction, our county has actually not been sitting idle on the issue of homelessness. In fiscal years 2015 and 2016, the council appropriated $641,000 each year specifically for homeless programs.

In fiscal year 2017, the council appropriated $1 million and approved two positions to tackle homelessness. This is in addition to more than $4 million in social services that directly or indirectly assist individuals affected by homelessness.

The total amount Maui County has spent both directly and indirectly for homelessness from its 2011 to 2015 budget is $27.1 million.

We have been taking care of this issue way before the governor’s emergency proclamation and the mayor’s demands for pop-up shelters.

Though Maui County is seeing a downward trend on our homeless numbers, we need to continue to be vigilant and address the issue, including serving those who continue to live on our streets or in our parks.

Our position affords us the opportunity to be strategic with our investments. We can diligently plan and continue to spend our funds with a long-term outlook, focusing on priorities that can permanently solve our homeless situation.

We must also direct our attention on providing affordable rentals and truly affordable housing to move individuals out of transitional housing in a timely manner.

According to Ka Hale A Ke Ola Homeless Resource Center, 60 percent of clients stay in transitional housing for 12 to 14 months. If a stay can be shortened, and an individual can be moved to traditional housing at a faster rate, I believe this will be a positive measure to help solve our homelessness issue on a longer term.

No one ever said finding a solution was going to be easy and I accept it is a major challenge, but it is not new. We must continue to recognize and tackle homelessness in a thoughtful and deliberate fashion.

In closing, I want to wish everyone a Happy Fourth of July! Enjoy this time with family and friends, but most important, be safe.