Though many take a break this season, your Maui County Council is still hard at work.

Hale Makua, which has served people with disabilities and elderly residents in Maui County for decades, is requesting an extension of its current lease of county property in Kahului and Wailuku for another 30 years.

A resolution to approve the lease for the nominal rental fee of $100 per year was received at the Dec. 16 council meeting and will be evaluated after the new council term begins Jan. 2. In the materials transmitted with the resolution, Hale Makua notes its goals include providing long-term nursing and rehabilitative care for 850 people each year and skilled home health care to 500 homebound patients.

Other actions were also taken at the meeting to ensure there will be many policy issues awaiting the 2017-2019 Maui County Council.

Bills 122 through 127 (2016) passed first reading and will be considered on second and final reading in January. Bill 126 would establish a Hawaiian Cultural Restoration Revolving Fund.

Bill 127 would ban polystyrene food containers starting July 1, 2018. After an amendment at first reading, the proposal now includes a ban on containers for foods prepared and packaged entirely outside the county but sold within the county, such as Cup Noodles. 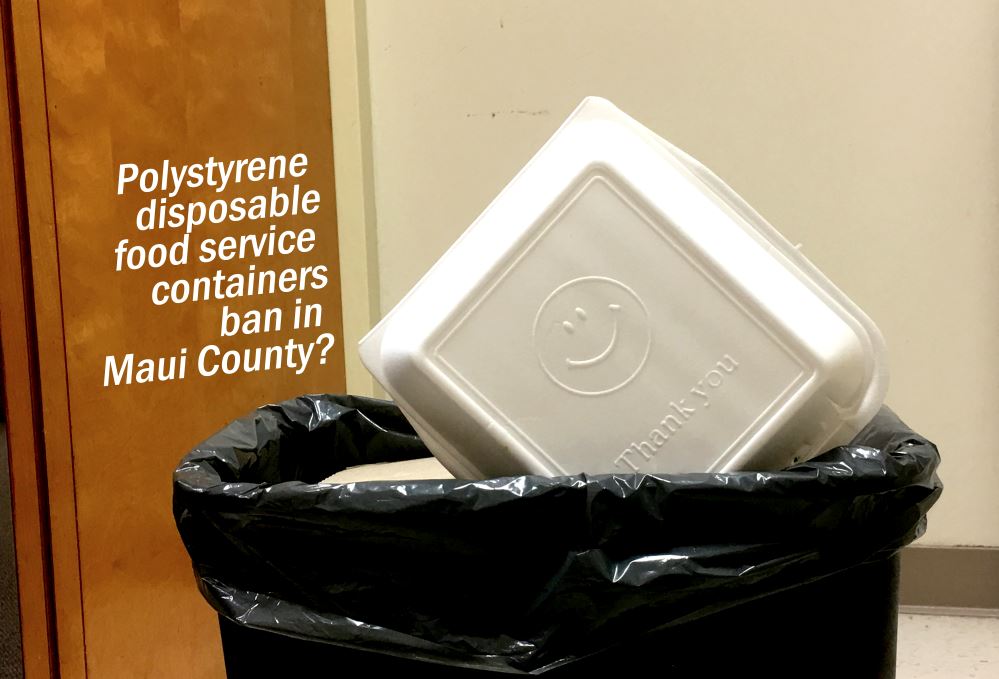 This proposal has the potential to impact many businesses and consumers. Therefore, before final action is taken, the council is requesting feedback from the community by emailing county.clerk@mauicounty.us or providing oral testimony at a hearing that is being arranged. To view more information on the bill, visit mauicounty.us/polystyrene.

At the behest of the council’s Planning Committee, several pending bills to change standards in various zoning districts and an initiative to review the community plan update process were carried forward. The Policy and Intergovernmental Affairs Committee’s request for the new council to consider bills to prohibit smoking and drinking in certain public places was also granted.

A proposal to waive the minimum gross income requirement to be eligible for agricultural water rates and a bill to expand the exemption from fire protection infrastructure improvements for those on the Upcountry water meter priority list were referred to the new term, as requested by the Water Resources Committee.

The council granted the Infrastructure and Environmental Management Committee’s request to have further consideration in the new term of a recycled-water project for West Maui, the establishment of an independent third-party building review process and my bill to repeal the stop requirement on Meha Road before entering Kealaloa Avenue in Makawao.

The Housing and Human Services Committee’s various affordable-housing proposals were moved forward to be taken up in the next term. Fifty items pending before the Budget and Finance Committee were carried over.

In addition, bills that have been reviewed by an advisory body will automatically carry over to the new term. This includes land use proposals considered by a planning commission. The idea is that applicants shouldn’t have to restart a review process just because of the calendar turning over.

Other proposals that didn’t get voted out of committee will expire at the end of the term, by operation of the Rules of the Council.

The council also adopted Resolutions 16-166 and 16-167, respectively, honoring the service of outgoing Council Members Don Couch, who has chaired the Planning Committee over the last three terms, and Mike Victorino, who is also president of the Hawaii State Association of Counties.