The 3 Can Plan – a pilot program for curbside recycling in some South Maui neighborhoods – was discontinued by the county’s Department of Environmental Management in February after two years.

Most of the program’s 1,570 households still have their three cans – brown for rubbish, green for green waste and blue for other recyclables. So, if the county has the will to do so, the program can be reinstituted – and, eventually, expanded to other neighborhoods.

Some program participants have expressed support for reinstating curbside recycling because of its convenience and efficiency. They’ve also said curbside recycling helps to promote the laudable principles and habits of conservation, especially in children.

The Budget and Finance Committee has recommended an additional $6 monthly fee for households receiving curbside recycling. The committee’s stated intent, according to Committee Report 15-53, is “that the project be reinstated for fiscal year 2016,” which starts July 1, 2015.

My office is independently surveying 3 Can Plan participants to formally assess interest in having the program resumed. Survey responses are due by June 1. 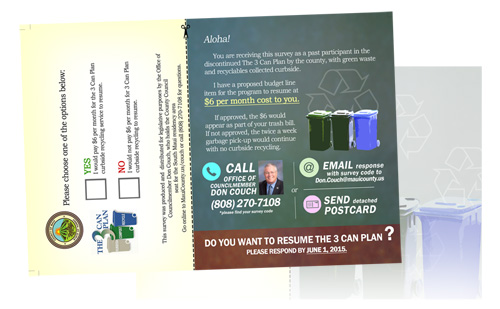 The administration is planning to develop a waste diversion* facility that would reduce landfill demands by 80 percent. Advocates state the project would provide environmental and economic benefits well beyond any potential gains from curbside recycling.

The waste diversion project – to be developed and operated by a company called Anaergia – may become operational within three years, at a facility near the landfill in Puunene. Requiring the Department of Environmental Management to focus on curbside recycling under these circumstances could, ironically, be wasteful.

The department would prefer to expend its resources on different forms of recycling and waste management, including the Anaergia project. In addition, administration officials don’t believe residents will want to pay the additional fees required to maintain curbside recycling.

The council’s first reading of the fiscal year 2016 budget is set for 10 a.m. on Tuesday. I will listen to public testimony and evaluate survey responses in advance of the June 5 council meeting, when the budget will be reviewed on second and final reading and the fate of curbside recycling may be determined.