For several decades, federal and state regulators granted Maui County permits under the Safe Drinking Water Act to use injection wells to dispose of wastewater at the Lahaina Wastewater Reclamation Facility.

In a novel ruling, the U.S. District Court in Honolulu determined the injection wells were also subject to the Clean Water Act, meaning a National Pollution Discharge Elimination System permit was required to operate them. The ruling in Hawaii Wildlife Fund vs. County of Maui was a surprise because the state Department of Health, which administers the NPDES program in Hawaii, had repeatedly told the county an NPDES wasn’t required.

In addition, the U.S. Environmental Protection Agency has been involved with the Lahaina facility since planning began for it more than four decades ago. The EPA never suggested an NPDES permit was needed for the injection wells.

Maui County is the very first entity in the nation to be affected by this interpretation of the law. There are 5,600 wells currently operating in Hawaii, with more than 400,000 nationwide.

Because the ruling was unprecedented and unfair – and could have far-reaching impacts locally and nationally – the county has appealed the ruling to the U.S. Court of Appeals for the 9th Circuit.

Recognizing the importance and complexity of the issues in this case, the County Council has approved the employment of outside counsel with an expertise in environmental law. The court has not yet announced when oral arguments will be heard or when the appeal will be addressed.

Even while the appeal is pending, the county is proceeding with planning for improvements to the Lahaina facility and actively seeking long-term alternatives on the use of injection wells. At the same time, it’s imperative to protect county taxpayers from the long-range impacts of the unusual and unsupported ruling in this case by the District Court by waging a vigorous appeal.

In other legal news, the 9th Circuit has scheduled oral arguments in Honolulu on June 15 for the cases of Robert Ito Farm Inc. vs. County of Maui and Alika Atay vs. County of Maui. In both cases, the lower court ruled that a ballot-approved ordinance relating to genetically modified organisms was beyond the county’s scope of jurisdiction.

The Office of the County Clerk is seeking civic-minded members of the community, age 16 and above, to serve as precinct officials during this year’s primary and general elections.

If you choose to serve, you’ll work in a polling place, assisting voters through the election process. You could be assigned to operate a station, such as the ballot demonstration station or ballot box station.

Officials from the County Clerk’s Office or the state Office of Elections will train you beforehand. Compensation rates for Election Day workers start at $85. 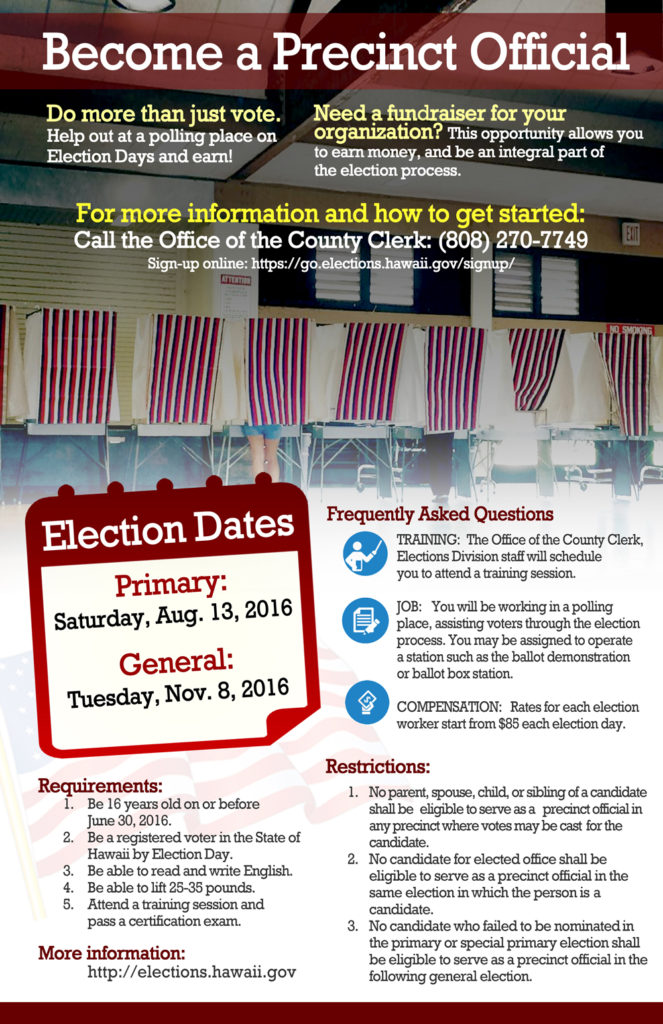 And coming up on Wednesday, the Land Use Committee, chaired by Council Member Bob Carroll, will consider the Waiale affordable housing project.

The project is proposed under Chapter 201H, Hawaii Revised Statutes, which provides developers of qualified affordable-housing projects the opportunity to seek exemptions from certain laws relating to planning, zoning, construction and development.

The project calls for 70 single-family residential units and a neighborhood park. The council’s deadline to act on the proposal is June 20.

The next council meeting is Friday, May 20 at 9 a.m. Review documents attached to posted agendas on mauicounty.us/agendas.